Following last week’s resolutions for improving learning behaviours, pupils need to be given the opportunity to practise. Without allowing for the opportunity to self-manage, be independent or demonstrate creativity, the resolutions will become nothing more than an interesting wall display. The following is one of the lessons that allowed that to happen this week.

Pupils were handed a ping pong ball, complete with question stem written on, as they entered the room. They were told that they did not need the ball to begin with and so should manage themselves by putting the ball to one side. There was an instruction on the board asking them to review ‘The Farmer’s Bride’ (a poem that we had discussed the lesson previous). If pupils were practising good learning behaviour, they would set aside the ball and concentrate on their notes, avoiding the distraction. 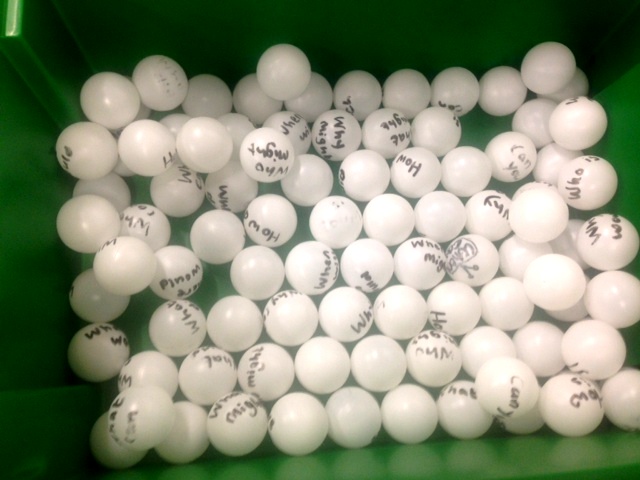 Ping pong balls are just so tempting. Even when you know you shouldn’t, you want to bounce them, to throw them, to ping them off things. You have followed instructions and are effectively participating in the review but you can feel the presence of the ping pong ball. It’s watching you…tempting you…driving you crazy!! Pupils who managed to control the urge were the first to be rewarded team points (every reward in this lesson goes towards a team total) for their self-management. Pupils who could not help themselves (I don’t think I could have) were reminded of their promises to manage their own behaviour.

After giving sufficient time for reflection, pupils were brought back together to discuss their understanding of the poem and to highlight how effective they were at managing their own behaviour. Successful people do not need to be told, this is a staged opportunity to practise self-management; they are able to control their behaviour when necessary. Pupils were made aware that opportunities to gain reward through self-management, creativity, independence, team work and reflection will appear every day and they should learn to recognise them when they appear.

It was over to the pupils. If they are going to be able to tackle the unseen poem during June’s exam, they need to learn how to question a poem for meaning. This poem is familiar to them but once they get the knack, they will be using the same questioning technique on other, less familiar poems.

Pupils staged their questions by beginning to look for language and structure through uni structural questions such as “Does it use rhetorical questions?” “Can I spot hyperbole?”  “What is the main theme?” Once they had enough multi structural information, they began to ask relational questions “How does the rhetorical question relate to the message of the poem?” with some asking more abstract questions such as, “If the poem did not rhyme, how would the meaning be different?” Pupils were also answering their questions and independently gaining insightful knowledge about this poem. To encourage further independence, the questioning technique was noted as a useful revision tool for them to use at home.

The thought bomb rally was a chance for pupils to verbalise their learning, learn from each other and to be rewarded for the quality of their answers as well as their insights. The tables had been set out in six groups. Each group was given a set of thought bombs to fill with relational or extended abstract questions. Pupils were reminded of what a relational or an extended abstract answer should contain, using the following generic examples:

Once the thought bombs were filled, ten minutes was placed on a timer and tables took it in turns to bomb each other. The table catching the thought bomb had to use their knowledge from the lesson to answer the question to as high a standard as they could. They used their multistructural research to develop a relational response, with some groups taking that further by adding their own informed hypothesis. Tables were informed of their score and why they got that score before throwing their bomb to the next table.

After ten minutes, pupils had asked their own questions, given quality responses to their peers and the rewards from the lesson were totalled.

After being seriously inspired by Ian Gilbert’s Independent Thinking, my pledge is to teach pupils how to think not what to think. Embedding learning skills, such as asking effective questions of their own, will help them on their learning journey. They should no longer look at a poem and say, “I don’t get it.” Instead, their response should become, “What is this all about?” Asking questions for the right purposes is also a skill that they can and should take beyond poetry.

Teacher5aDay for Geek Teachers With Children