Banging on about the same old thing, in preparation for an exam, has the potential to make everyone (including you) sick. If you have found yourself in that place, I hope this helps…

My Year 11 class are sick to death of revising for the AQA Language paper! For the past half term, that has been our relentless focus. We have weekly mock exams, targeting individual areas for improvement. I am assessing exam work, home work, class work, after school work, oral work and any other work, providing as much feed forward as time will allow; with all this work going on, we could soon forget we are here to learn.

So as not to turn them off our wonderfully creative subject, I have been disguising exam preparation behind sessions such as murder mysteries and the annihilation of celebrities that we all love to hate. Lately, I have felt utterly exhausted by the pretence and they were beginning to see through my mask; although everything we were doing was worthwhile and very focussed on the right skills and content, it was all getting a bit samey. They needed a higher challenge. This called for something completely different.

One of my favourite things to teach is the A Level Text transformation. This is where A Level pupils get to choose from a wide selection of literature and transform the original into a separate genre of their choice (not necessarily nonfiction at A Level but for the purpose of what I did with this we looked specifically at nonfiction). In the past, pupils have transformed Kate Chopin’s work into transcripts between psychiatric doctors and their patients, Shakespeare’s plays into forgotten sonnets and even the work of Donne has been given the transformation treatment and became an article from Nuts Magazine. This is such a wonderfully creative process and yet must be based on a sound technical understanding of genres. I love it!

Boom! The idea hit me; why not use this technique for teaching nonfiction texts at GCSE?

In an ideal world, I would like to begin teaching pupils about the multitude of literature poems that they must get to know intimately for their summer exam. This content is purposeful as the literature exam can often be left as an after thought. Unlike the language exam, it is not cashed in as a golden ticket at the end of the year. I know that keeping the class focussed on the goal of their up coming Language exam is sensible, especially given that it takes place directly after the Christmas holiday, but by taking this idea of a text transformation, I could kill two birds with one stone.

My Year 11s already understand the effects of language and structure and they get the need to interpret the meaning of a text based on its genre, audience and purpose.  Therefore, presenting them with a poem and asking them for their own interpretation was not a terribly demanding task… this is just the starter.

I hooked them by using the image below and asking: “Would you still kiss your lover if they looked like this?” As well as being the basis for a rich discussion, this gave the pupils a taste of the purpose of our chosen poem Manhunt by Simon Armitage and off they went exploring. To succeed, they had to successfully interpret the language, structure and meaning behind this poem before moving to the next stage. 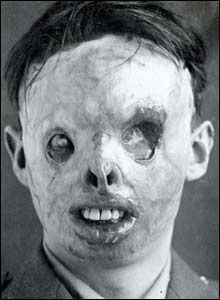 The outcome of the overall task was for pupils to have a deeper understanding of the technicalities involved in the creation of nonfiction texts. They should be able to repeat this method as an independent revision task without my assistance.

To maximise the benefit to them, they needed to recognise how each step of this process could assist them in their language exam. Thanks to our half term of revision, the exam structure and expectations is embedded in their minds. They could make connections fairly easily with little prompting from me (the connections are highlighted at the end of this post). They also had the added bonus of developing their understanding of a literature poem (one down plenty more to go).

They were doing this by analysing a literature poem for language, structure and meaning, as well as choosing a nonfiction text (leaflet, blog, newspaper, magazine etc…) to transform the poem into. They had to analyse the nonfiction text before beginning their transformation and recognise which features of the poem would need to be transformed to create a successful end product so that their final transformation would be technically accurate.

Because we were sick to death of exam preparation and it was time for a challenge. This is essentially an A Level task but my students could take it! Pupils are able to prepare for their Literature exam (albeit under the cloak of language) and do something interesting and different as well as relevant and challenging.

After analysing their nonfiction base text and poem, pupils produced a text of their own creation.  The guidelines for success were to have used the meaning, structure and language from the original poem but to have created a technically accurate product for their chosen genre. For example, if they had chosen to write a persuasive speech, they might have analysed a speech by Barak Obama for its structure, language, techniques etc… and then mirrored his techniques in their work. The content of the speech could be about victims of war, this would demonstrate an understanding of the original poem’s meaning; they might also have used the repetition of metaphor to emphasise the message and reflect Simon Armitage’s language and structure. This technique is effective across both genres and so by choosing it, pupils demonstrate skill in selecting appropriate techniques, which can cross over genres.

Same message, more challenge, more interest and, in the long run, more use.

Pedagoo Review – My favourite Lesson of the Year