Lifted out of my striated Saturday space, away from SpongeBob and Horrid Henry, Dr Phil Wood, @geogphil (or Dr Phil as he will be hereafter named) was waiting in Nottingham to deliver a truly inspiring Thinking Saturday. Dr Phil was ready with four perfectly pitched plateaus in the form of thoughts, research and reading that captured the attention of an already seriously inspirational audience of ITL Associates (and me).

David Didau may be pleased to hear that, as a result, I have started reading and where better to start than Deleuze and Guattari’s A Thousand Plateaus? Don’t worry, I have not become a high brow overnight…don’t be silly…Dr Phil’s inspiring way of allowing us to take our own rhizomatic ramble through learning allowed me to decide the right direction for me to take my learning and, of course, my over active brain wants to take it all over the place! One of my directions will include the creation of appropriate plateaus for the learners in my classroom to leap off into learning. Like this… 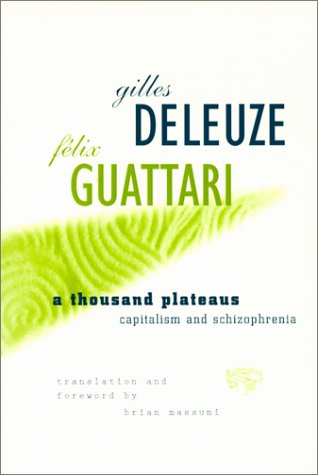 Dr Phil reached us by providing an intellectual plateau that was appropriate to challenge our thinking on our level. This intellectual approach worked for me last year as I taught the information hungry 11X1. Find this lesson here. However, 11J3 had a less positive response to the news that we were about to explore fifteen poems for their literature exam. If this class have any chance of making this new GCSE worth more than the paper it is printed on, they had to develop an enthusiasm for poetry. They have to see the point in poetry; telling them that this is an expression of emotion is not going to be enough this year.

The Plateau or Connect

Getting pupils in place of the poet will help them to see how poetry is constructed but they have to want to write the poetry in the first place for this to have any impact. Pupils need a plateau that allows them to feel enough emotion to want them to put that into words. I chose to give them each a recent newspaper and time to flick through the pages until they came to an article that evoked in them strong emotions. Dr Phil taught me that speed was damaging; I did not impose strict time limits. I did not mention poetry at this point as I did not want them to be focussed on what they were using it for, rather they should be focussed on the emotion they are feeling.

Soon enough, pupils were reacting strongly to a range of different articles from football transfers to seriously sad stories about family dogs killing children. The emotions that pupils felt belonged to them; the emotions were not being imposed by anyone else and were genuine, personal emotions.

Pupils were provided with a blank page and a wide range of words, cut from various newspapers. Pupils began choosing words that expressed the emotion that they had been feeling and began arranging them in the order they were felt. A sheet of poetic terms for language and structure was also provided and, at this point, could be used or not used as they saw fit. Their goal was not to create a perfectly polished poem but to create an expression of their personal emotions.

By questioning pupils’ choices as they worked, I was able to explore their thought processes during production. Careful not to interfere with this very personal expression, I was pleased to see actions occurring such as the avoidance of rhyme to emphasise the seriousness of their poem and the creation of free verse to express the tumble of feelings without order.

One boy was expressing his feelings about a coupon he had found in the paper. At first, I thought perhaps he had missed the point.After hearing that he had created a free verse poem containing two distinct stanzas, I realised he had really got it! He explained that the first stanza contained long lines full of positive vocabulary to express the joy he had felt at finding this coupon; the coupon was for trading cards that he was currently collecting. The second stanza contained shorter lines with negative vocabulary to connote the complete change of emotion when he realised it was expired. He had stepped into the shoes of a poet and understood how poetry could help him to artistically express his feelings.

Pupils, proud of their creations, had understood their own poetic structures because they belonged to them. They meant something to them individually. They were then able to apply this learning to looking into other peoples’ poetic creations, people like Shakespeare and Marvell. When exploring James Fentons’ In Paris With You, for example, pupils could recognise that he had used rhyme despite the seriousness of the subject matter and asked, is the poet trying to be deliberately childish? They saw the point in the stanza breaks and the reason behind the choice of words because they had been there and done that and gone on their own rhizomatic ramble through poetry.

The newspaper had provided the plateau, the freedom had created an opportunity for rhizomatic rambling and the experience gave poetry a new purpose. Dr Phil did not like the idea of the teacher as a “facilitator” as “facile” meant to make easy. Learning in this way is not “easy.” It requires mental energy on the part of the learner and, let’s face it, sixteen year olds who actually choose to put mental energy into poetry are few and far between.

Providing a plateau from which pupils want to jump takes mental energy on the part of the teacher but the rewards for getting it right are worth it. You need to remove yourself from the striated space that you have become used to. I was too used to pupils who wanted to invest time into analysis of poetry just for the sheer love of it. Taking a step back was necessary in order to reterritorialize myself and find the right plateau for them. For ITL Associates, the right plateau was different, deep and inspiring ideas; for 11 J3 it was relevant news. For neither group was learning made easy but on both occasions everyone involved was ready to invest mental energy into becoming.

I will take my time over A Thousand Plateaus and I am looking forward to becoming, wherever it takes me. Thank you Dr Phil.

[…] fictional characters, tried out different techniques for studying and even had had a little rhizomatic ramble. However, one of my favourite moments of the day was attempting the Solomon Asch conformity […]