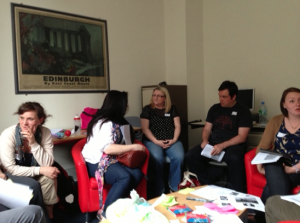 #tmlovelibraries, which took place in Edinburgh last weekend, gave my positivity stores a huge boost! Thank you to the brilliant @fkelly for organising such a great day, and for inviting me to be a part of it. Manglish was the topic of my workshop, an approach to cross curricular collaboration; Manglish about avoiding missed opportunities and empowering teachers of all disciplines to include purposeful reading, writing, Mathematics and communication in their lessons.

As I am still working on the book version of the workshop, I will avoid writing about the ins and outs of Manglish and instead share with you one simple idea for encouraging effective communication. This idea seemed to go down very well both in Edinburgh and at the recent #TMeng in Leeds so I thought it might be well worth sharing.

Below is a generic example of an exercise that you could base your own ideas for thought bombing on. This example could be translated into introducing characters from novels or poems (English); exploring the lives and decisions of historical figures (History); looking at cause and consequence (PHSE); Exploring bodily functions (Biology). The list goes on. The idea is that pupils are given a small amount of information to get them hooked and then the thought bombs are thrown in to blow their minds. 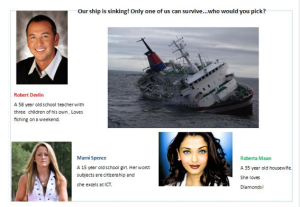 This opening question must be thought provoking enough to get pupils talking, providing just enough information to get them interested and to generate discussion but also holding back enough back to make the bombing worthwhile. If you were to give too much away at this stage, a decision could be made very quickly and no further discussion may be necessary. In the above exercise, pupils are asked to discuss each character and note down their reasons for or against saving or sentencing each one. They were asked to agree on a survivor; Marni is usually top of the list to begin with as she is young and has her whole life ahead of her… before the first thought bomb is thrown that is.

The thought bomb is a plastic ball, the kind that you find in children’s ball pools. It has a small hole cut in the bottom, has been painted black and a little glitter has been sprinkled on just for added beauty. Inside the bomb, I roll up slips of paper with new knowledge about the given situation. For example, inside one thought bomb for the above idea, the paper reads: “Marni is a convicted killer.” And in another, we are told of Roberta’s charity work and of how she fosters children with disabilities. This new information makes the pupils go “Ooooooo” and changes the situation entirely, as now they have much more to take into account when making their decision. The thought bomb has exploded current understanding and forces pupils look at the situation from a different point of view. 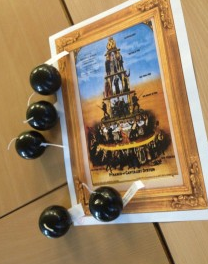 Thought bombing is about gaining pupils’ interest and their own ideas, allowing them the freedom to explore. If you are introducing a topic such as the life of King Henry VIII, which requires pupils to know key facts, you are still introducing the key facts through the thought bombs but you are encouraging pupils to explore their own interpretation of events. How do they as individuals feel about the topic being discussed? How would they have solved problems differently to historical figures or characters? Thought bombing allows them to engage with the topic on a personal level but still allows you to introduce the key information required to cover your topic. Thought bombs are fun! Yes, they get thrown around the room (this is actively encouraged) but pupils are engaged in relevant discussions, thinking critically, communicating their own ideas and gaining valuable new knowledge in the process.

[…] ripped off of Lisa Ashes, create thought bombs with lesson starters on that form a quest or activity linked to the lesson. An example I’ve […]

[…] An example of getting this right came in a history lesson created to learn key facts about Nancy Wake, Joseph Goebbels and Alan Turing. The story was fictional and set in one place – a sinking ship. Learners were told that they could only choose one person to survive. I gave them the bare minimum of information about each character and they began debating who had the most to live for. Many went for Joseph as he had six children so it seemed that he was the most needed. I then began drip feeding more facts using thought bombs. A LINK TO FULL LESSON HERE […]