You know when you have organised a party and you’re really afraid nobody will turn up? That was me on Saturday the 6th of December. I knew it was a gamble, no big names, no big prizes, simply sharing ideas as educators. Biting my nails and giggling uncontrollably at inappropriate moments to hide my fear, I watched the clock tick to 2:30. Then… boom! It began. Half of the number of people that signed up arrived but it was obviously the right half. The people in attendance created an atmosphere that made my heart go all warm and, because of them, the day was a great success.

My biggest takeaways from the day will be used for lesson planning first and then developed into more useful blog posts than this at a later date. My favourite presents were the simple strategies such as: ways of supporting EAL students from Kamil Trzebiatowski; an intuitive (cheaper) alternative to iris via Jon Haines and VEO; an awesome app called colAR from Mark Anderson; an inspiring approach to the dangers of the ‘net via Helen Blanchett and Simon Finch; as well as Sam Bainbridge exposing my competitive side as we competed to create Christmas trees at Blakes. No matter what participants took from the day, I hope that the impact upon pupils’ learning is one takeaway that is achieved by all. 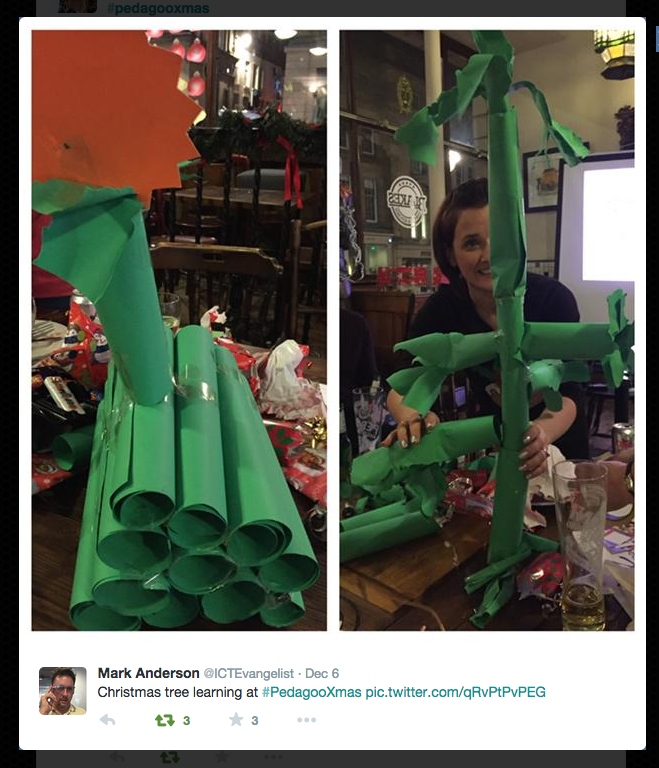 It is really hard to believe that Pedagoo Christmas the third has been and gone. It will return with baubles on next year. As many of my friends already know, this has been a tough year to smile through. I am not one for putting my personal life into this blog but in the interests of transparency, I feel I should share why next year’s blog and next year’s Christmas party will be hosted by Ashes in a very different place.

It took my husband having a stroke this summer to give me the slap in the face needed to remind me that life is very short. I love being a teacher. I love my pupils and my colleagues very much. However, the world is bigger than my classroom and even bigger than my school. Over the past year, working with ITL has allowed me to develop as an educator of educators. I’m so lucky. Creating bespoke CPD is one of my favourite things to do and, as more and more people outside of my school have been asking me to work with them, I have decided that in 2015, I will be taking time out of my classroom.

I was fearful of this move for so long. Fearful that I wasn’t good enough. Fearful that people would ridicule me for no longer being in one classroom, for daring to become the dreaded consultant who tries to tell real teachers how to do their job. Following Tony’s illness, I’m not afraid anymore. The fear that death may take someone so easily far outweighs the fear of what a few people may think.

Leaving Joseph Swan is one of the hardest things I will ever have to do; it has been my home for so long. However, I am leaving to support and develop Manglish curriculums across the UK (and hopefully beyond), to investigate how my ideas could be used to close the gap for those most in need of education and to move way beyond my comfort zone in order to make a difference in the world. Leaving might be tough but staying, knowing that it is within my grasp to do all of this, would be a waste of the potential impact I could have.

This year’s Pedagoo Christmas party was brought to you by Lisa – Jane Ashes, Advanced Skills Teaching and Learning Leader… next year… who knows who or where I’ll be but I promise you there will be pupils better educated somewhere as a result of whatever I’m doing.

Pedagoo… to Infinity and Beyond!

oh Lisa… I had no idea. What a brave post, and an exciting new direction. Love n hugs, Alex

You will be awesome, Lisa. Go forth and create in the knowledge that you are highly skilled and deserve the success. Sometimes it takes a push to jump off the cliff and realise what is important.. now go for it!