My time holding the baton for @ITLWorldwide is coming to an end. This week has been filled with inspirational tweets from lots of educators, proud to show and happy to share ideas from their classroom. It has been a breath of fresh air to click on the hashtag and see, not only inspiring ideas but the comments and questions arising from them. Not arguments over the effect sizes of people’s  ideas or, “I have read more about education than you this week, therefore…” or wittly back handed, big worded ego tweets. Instead, replies to tweets included, “Amazing,” and, “This idea is brilliant!” Life in school can be tough and positive is what I want my world on twitter to be.

As expected, the tweets are beginning to slow down a little now. It is the end of term, we are all exhausted and ready for a rest (I’m planning to pass the baton to another ITLer that will keep you smiling in a very different way next week so watch this space). Planning for the new term is, for me at least, going to be a little easier as I peruse the feed of awesomeness that is #proudofmyclassroom.

This tweet exemplifies why we need to allow educators on twitter to retain the ability to share ideas with confidence rather than argue about whether it has been researched enough to be viable to use: 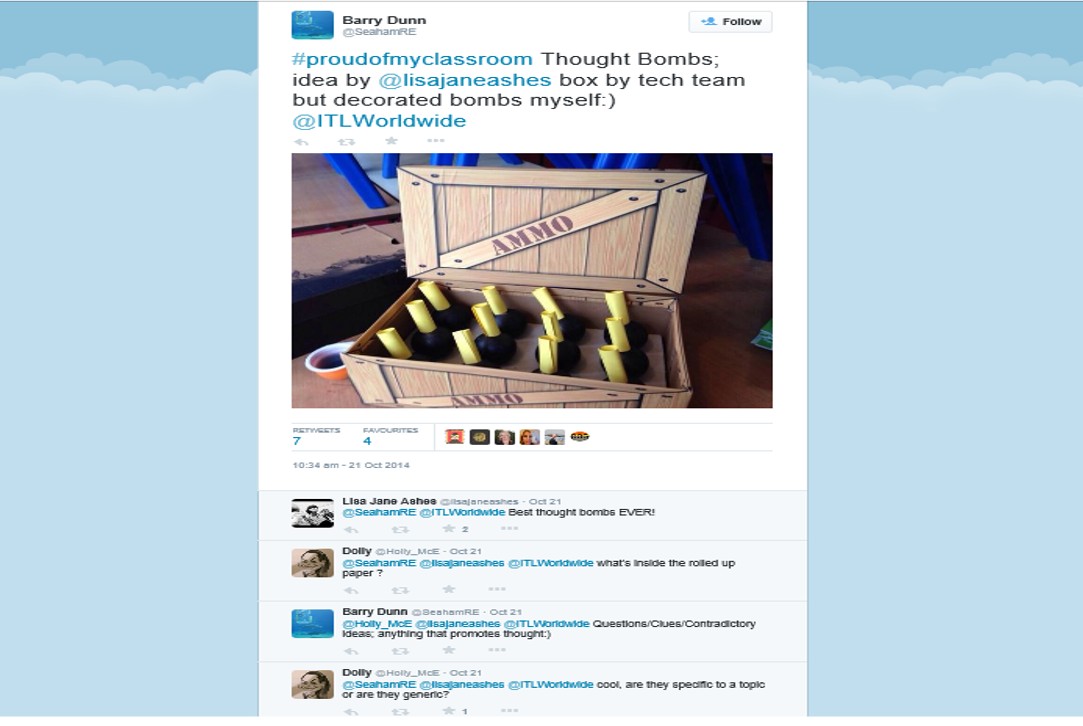 Relentless positivity is not going to change the world. Challenge and questioning are necessary to provoke new thinking and new thinking can change everything. I’m not against research at all. Neither am I afraid of challenge or thinking in new ways about education. However, 140 characters makes it difficult to determine the tone, expression and meaning that can be understood in longer exchanges and, better still, seen and heard in face to face meetings. I never have and never will argue anything out in tweets, emails or any other form which requires me to hide behind a computer. Many will think that statement is an argument – it is not – it is a statement. Some people relish the argument and this is great if you know the person you are arguing with can take it, wants to argue it out and revells in the discussion as much as you do. Twitter is what you make of it and, if you want a positive twitter, you can simply ignore that which you do not like.

If I don’t think a tweet is interesting, looks boring, I’ve tried something better or there is research to suggest it’s rubbish, but I don’t know that person well enough to offer advice, I ignore it. If I talk to somebody new face to face and I can offer suggestions or advice, then I do. If I’m invited to debate ideas or asked for advice, I do my best to help out with the up to date knowledge that I have. Much of that knowledge comes from extensive reading, attending conferences and having real debates with real people. This is my preferred way. I don’t get followers this way but I sleep well at night. As I explained in my first post this week, too often tweachers feel the fear of ridicule, the fear of looking stupid and the fear of nobody caring about what they have to say. Meanness = followers and followers = feel good + who cares if you hurt their feelings. Sometimes, people respond to tweets in a very well meaning way but the lack of expression in 140 characters can lead to misunderstanding and this is where the fear felt by many originates. Before you respond, think. Behind that avatar is a real teacher. Will your feedback deminish their confidence to tweet next time?

The ideas shared on #proudofmyclassroom will inspire some great lessons I’m sure and, if the lessons are successful next half term, I hope to see a new wave of tweets coming in to see how these ideas have developed into brand new ways of engaging our pupils. For me, twitter is great CPD; I love to read the ideas of others in their blogs, love to try out simple ideas that have been tweeted, love to adapt, build on and create more ideas for others in the future. This week has restored my faith that twitter still is a positive place for simply engaging with other educators and simply sharing great ideas.

Thank you to all who contributed 🙂

All #proudofmyclassroom tweeters will be put into a prize draw on Saturday and @ITLWorldwide has offered a goody bag to one name which I will pick out of a hat. The winner will be announced on my handover day which is Sunday.

If you want to take the sharing off twitter and join us at this year’s Pedagoo Christmas Party on the 6th of December in Newcastle (finer details to follow and a fuller explanation in previous post), sign up below: