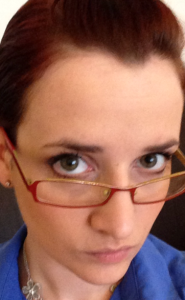 Ashes has no sense of humour during controlled assessment season

It is a truth universally acknowledged that Steve Bunce @stevebunce is a legend. Alongside Simon Finch @simfin, Bunce has set up a very relaxed, monthly Teachmeet at Blakes’ coffee shop in Newcastle which, trust me, is well worth your attendance. Due to the pressures of controlled assessment marking, I attended the most recent Teachmeet Blakes in desperate need for inspiration.

Memories of my last lesson with Y10 were swimming in my mind. Controlled assessment marking had addled my brain. The lesson took place in someone else’s room; the kids were sitting in rows and I was spouting some boring nonsense (boring to them not me) about Shakespeare’s use of language. It was awful. One boy spoke out of turn, resulting in punishment from me and when the Year 10 support assistant came in for a standards check, he quite rightly stated: “something she usually finds funny got me in trouble.” What was going wrong?

As part of the AQA English Literature course, pupils are required to compare Othello andWuthering Heights and explore the theme of love. Last year my Year 10 class loved this(blogged about their work here). With such fond memories, I had entirely forgotten that this new class are not the same students. They have very different likes and dislikes and what worked last year was most certainly not going to capture their imagination in the same way. The slate needed wiping and I needed a new approach. Taking the TeachMeet stage first, Bunce asked: “What could you teach using just a ruler?” and BOOM there was the inspiration I needed.

I got my sense of humour back and thank you to @billgibbon who swapped his raffle prize to make me smile!

Needing to make amends for the disgrace that was the lesson previous, Brian Adams’Everything I Do I Do it for You was playing as pupils entered. Rulers were laid out, one for each pupil, and the Shakespeare quote “If music be the food of love play on” was displayed on the board. I sang along and channelled the words at each and every one of them. Being a lively class, many of them began dancing, singing and joining in. Instead of barking at them to take their seats (I may have done this the lesson previous while in strict teacher role), I let them enjoy the moment, encouraging them to play along with the tune on their rulers.

Some beat out the tune perfectly, others I encouraged to slow down and listen to the beat; soon enough we were all strumming along in unison and loving the rhythmic moment. I used the words of the song to remind them that, although last lesson wasn’t perfect, I was doing my best for them, everything I did was with their best interests at heart, and today we were coming at it from a different angle. My heart was warmed as the same boy who put me right last lesson said “Don’t worry Miss, these differences in opinion are a perfectly healthy part of relationships.” I think I was forgiven and it was now time for the ruler playing to have a purpose.

The pupils were provided with a sonnet, a free verse poem and a rap and were asked to investigate the differences using their rulers. No longer was I standing in front of them imparting knowledge to deaf ears; they were now very noisily beating out meter, exploring the rhyme and discovering iambic pentameter entirely accidentally on purpose. I was on hand to provide them with the poetic terms of their discoveries while they were happily discussing the differences in effect between the three forms. Best of all, we were all smiling!

Pupils are still in the very early stages of exploring Othello. Its storyline and language is complicated for a disinterested fourteen year old to master and so it requires lots of reflection and investigation. If they do not yet understand who does what and why, they are very unlikely to ‘get’ how Shakespeare uses meter to expose Othello’s outsider status. Therefore, we did not use this new understanding to dive straight in but instead used it to further explore the relationships within the plot.

Create a free verse poem that detailed the plot of Othello

Create a rap detailing the plot of Othello.

This learning was fun and purposeful. Pupils were noisily playing out sonnets of their own making and asking questions to firm up their knowledge of the relationships within the plot. “Can I say black miss? It rhymes and it’s true but is it racist?” led to a discussion about the differences in context between then and now. “What was Iago’s wife’s beef?” Led to a debate about how Iago appears incapable of love. The pupils’ end products, imperfect though they are, can be used to help them recall plot points at a later date. I still remember songs that I made up at school (pointless songs about lolly pops coming to an end and parks for geriatrics) and I hope that the same will be true for them (although their work will have purpose).

To any teacher that has not attended a Teachmeet, I urge you to get yourself to one. This was just one of the many simple, effective ideas shared by enthusiastic educators that evening. As I said at the start, Bunce is a legend but so are all of the other teachers that came along to share. I arrived that evening worried that I should have been spending my time planning not eating nibbles and enjoying myself; I left with enough ideas to plan memorable lessons for weeks to come.

How I Plan for Progression

Reply
Differentiation, Communication and My Favourite Play | Reflections of a Learning Geek 09/09/2013 - 8:58 PM