Have a go at solving the following problem:

Is a non-spherically symmetric gravitational pull from outside the observable Universe responsible for some of the observed motion of large objects such as galactic clusters in the universe?

Feeling up for it? Probably not… When I want educated professionals to experience the fear of overwhelming tasks, I use unsolved physics problems like this as a metaphor for the ‘too difficult.’ This fear can have a disabling effect on the learning process. If you do not have the skills, tools, experience or knowledge to overcome fear, you may switch off and avoid the discomfort by not trying at all. Knowing what the fear feels like doesn’t mean that I always get the level right first time.

Taking over a ‘high achieving’ Year 10 class, I assumed that they had a certain level of skill when it came to essay writing. “Never assume” is one of my daily mantras but I always end up doing it at some point! Pupils in this class are preparing for the new Literature examination, in which they will be expected to write a number of extended essays in a short space of time. “We don’t do essays” they proudly told me. “We do paragraphs.” Their fear of this seemingly overwhelming task was clear as the atmosphere was quickly turning savage against me. Do I go back to their comfort zone and make my life easy? Don’t be silly! There is always another way…

How do I get them to overcome this fear of longer writing, come away from the single paragraph of safety and step up to the full essay without sending them over the edge?

Prior knowledge told me that pupils have all read A Christmas Carol. They understand the story but are struggling to turn that into a full essay reflection. They are versed in what makes a good single paragraph and are confident in reviewing individual paragraphs.

Grouped tables were set up with:

To open the lesson, the teams of pupils were asked to individually complete an alphabet reflection. This is a simple task that asks them to recall all that they know about the novel so far. They must link what they know with each letter of the alphabet. More than a settling activity, this also allowed me to reinforce that their knowledge of the whole novel is as important as picking out the features in the extract provided. This reflection would be useful throughout the lesson. 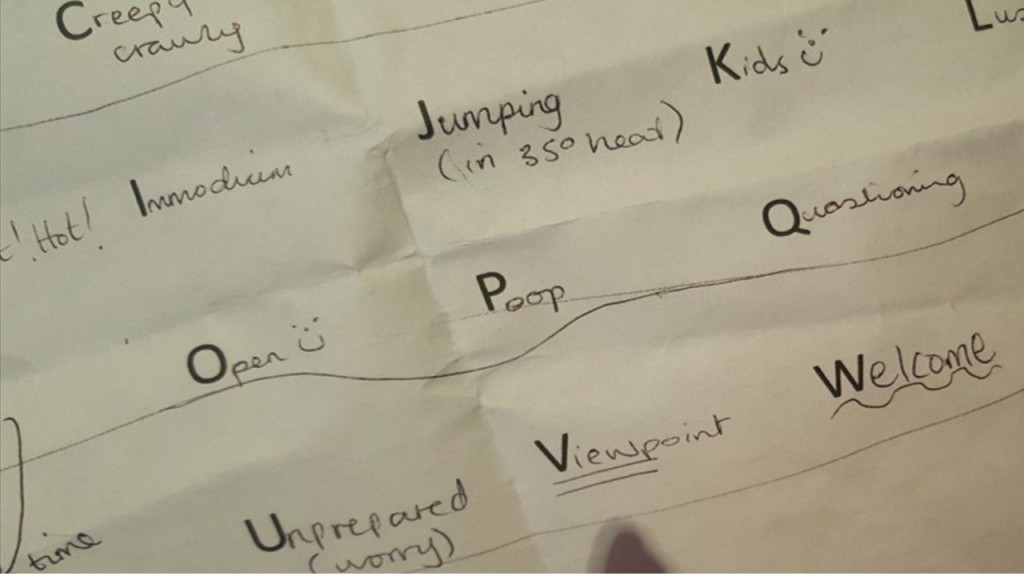 My own alphabet reflection on my time in Ghana. A useful reflection tool…not just a settler!

The big picture was shared with pupils. We are working together to create an example essay. We can’t work together in the exam but this is a stepping stone to remove our fear and provide a starting point. The process and rules were explained and off they went.

In their groups, pupils spent five minutes at each station. They were exploring their section of the extract with their directed topic in mind and discussing what they might write about it. They used one blank hexagon to record their thoughts before moving onto the next station. When they arrived at the next station, they first read what their peers had written and then worked to add their own ideas.

In the final round, they used their existing knowledge of developing paragraphs to reform the individual ideas into a coherent whole. The conjunctive adverbs were used to connect ideas together and they could wipe clean any corrections or additions they felt were necessary. I took photographs of their final creations to collate into a typed whole. 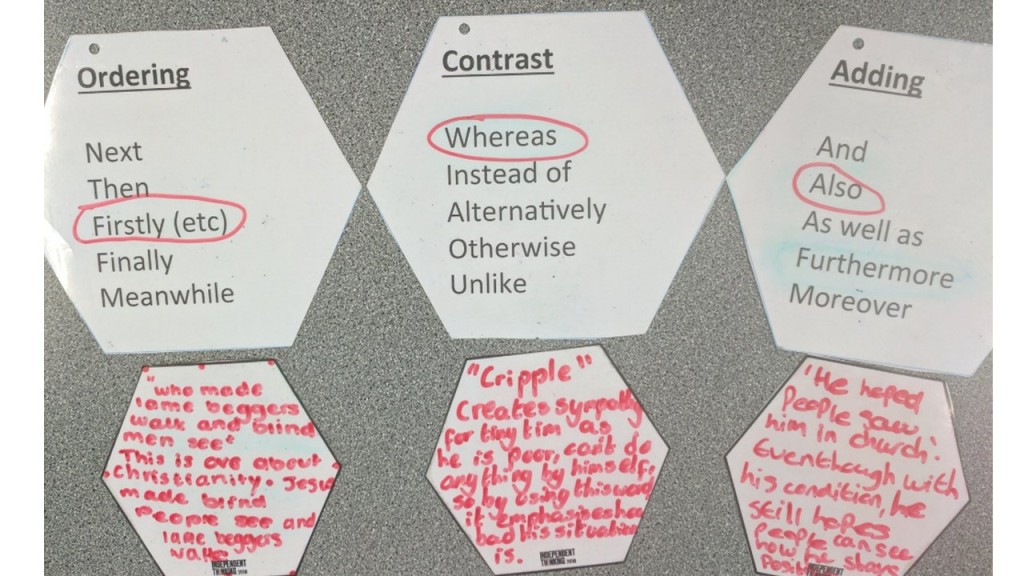 The next lesson, pupils were presented with their whole, reformed essay. They had done it! Albeit as a full class to begin with, they had created a whole essay. This was used as our first example. It was not perfect but we were able to use it to critique, improve and as a model for their own starting points. We turned what we did as a full class into a planning process for individual work.

For homework, pupils sat their own mock exam using what we had learned about writing essays from this process. I am currently marking 30 full essays, just a week and a half after being told, “We only do paragraphs.” The fear was overcome, not by forcing them into doing something that felt like quantum physics, a mountain that they were unable to climb. But by looking again at the problem, breaking it down into chunks, working together and providing the knowledge, tools and examples needed to leap the hurdle and get on with the learning.

“Some…are More Equal Than Others”

Differentiation by Task – A Story of Effective...

How I Plan for Progression