Home Behaviour Reflection of a Lesson in Oracy
BehaviourMAnglish

Reflection of a Lesson in Oracy

One thing we all have in common is communication. Even if you chose to lock yourself in a dark room, never to speak to another soul, you are communicating your will to be left alone. Effective communication is a powerful tool. After reading Debra Kidd’s blog on School 21, I wish I had the guts to pack up and move to London to be able to work there. However, having a young family and commitments in the North East, I am not free to run to London and seek my fortune. Fortunately, I am free to plan my own lessons and ensure that oracy is a high priority.

Witnessing how engaging and empowering oracy can be for pupils, it is always on my lesson plan. Every lesson has communication in it by default so why not harness it? Pupils that are articulate can answer questions and demonstrate their understanding. Pupils with these skills are able to listen, question and respond to learning. Whether you are a geography teacher or a teacher of mathematics, spending time helping them to communicate will pay off in the long run. A teacher’s most powerful tool is their ability to communicate effectively. When you are supporting pupils in their oracy reflections, you can be reflecting on your own ability to lead, speak, listen and join in, improving your own practice (win, win). Here is a reflection on a lesson that I taught this week to give you an idea of the possibilities.

When pupils ask, “What are we learning this for?” I hope I am always ready with a response that goes way beyond the end of year exam. Having read their written responses to a question: How does Willy Russell present the difference in social classes? Pupils were responding with straight forward ideas about talk. “Micky swears a lot.” “Edward is posh.” Consequently, this lesson aimed to give them an understanding of spoken language and allow them to delve deeper into how the characters were presented through their talk. Spoken language may not be a topic on the spec anymore but it is clearly an area that can support their learning in studying plays. They can also use it in everyday life, making friends, communicating with teachers, parents and, very soon, to get themselves a job or promotion. This lesson has purpose way beyond the exam.

Pupils enter the room and are immediately asked to begin the lesson by reviewing their thoughts on social class. Click here for the original idea and full instructions by Samantha Bainbridge. Pupils had learned about social class and stereotyping last lesson. Opening the lesson by looking back gives them a chance to look over their notes and review their learning through discussion. They are not yet perfect at sticking to the speaking tasks set and so I am still using this time to train them.

As they talk, I listen, writing down what is being said, taking note of interesting responses and also of discussions about break time, boyfriends and girlfriends. During feedback to the class, they get a giggle out of some of the things that I have been listening to; however, they understand that I am listening and they get to hear a model of what I should and should not be listening to. This method is non-confrontational and pupils are beginning to settle down to discussion tasks and stick to the topic much quicker than when we first began. Creating robots is not the plan – I hope to get them to feel that discussion is purposeful and rewarding.

When questioned about the differences in social classes, pupils again expressed simple thoughts about how the characters speak. Similar to their earlier writing, pupils said things like, “One is posh and one is rough.” This is an opportunity to introduce some new terminology (see slide below). The new information links directly to what they already know but takes it to another level. Pupils are given examples of each spoken language term and they wrote this up in their glossary. 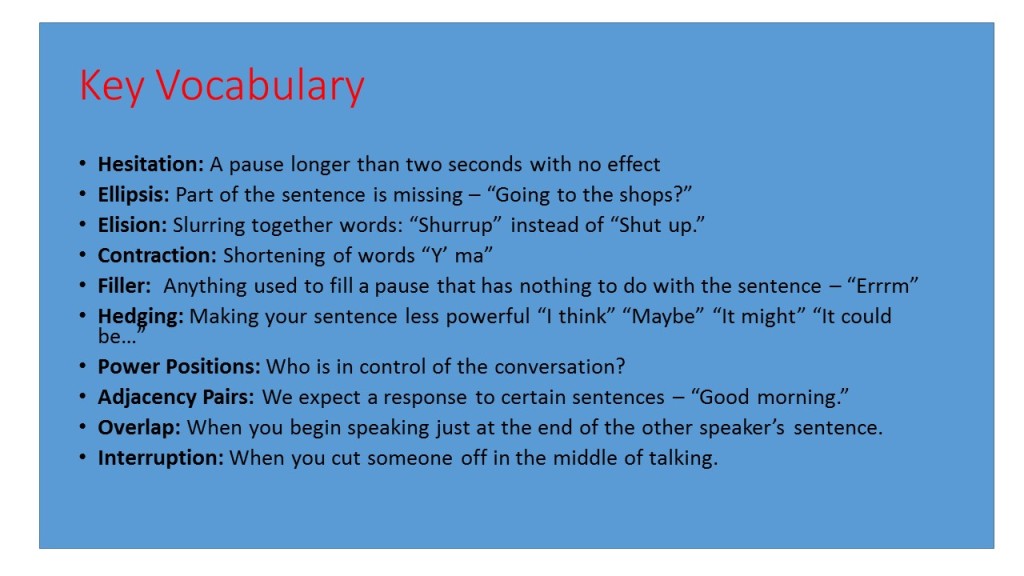 This part of the lesson was very teacher led and it needed to be. The interesting thing is how engaged they were throughout the time it took me to get this information across. They wanted to know what the words meant and they started to point out the non fluency in my speech (I was purposefully putting them in). Perfect!

To give me a break from being examined, they were shown these two clips from well-known comedies.


Again, the idea is to link to what they already know, allowing them to make synaptic links and retain this new information more easily. I was sure they would have seen these clips before. I asked them to identify the features of speech we had just learned. They did this with ease as they are so exaggerated in comedy. Once they had identified the features, they were then asked to understand the effect of the features on an audience. Here are some example responses:

Some of these responses were unrelated to the part of the text that we were about to read but they did link directly to our relationship as teacher and pupils. I was able to talk to them about how shouting over me, asking unrelated questions, using informal language in responses etc… made them appear. They were very positive throughout this discussion and their behaviour was visibly changing. They were thinking about how their language use affected others and made them appear. It was a joy to behold.

When pupils were again asked to reflect on the differences in social class, they were able to analyse how characters’ spoken language demonstrated their background. They linked this to education, to manner, to comedy value and to themselves. Many of the pupils in this class come from a very similar background to Micky. They would not want to be described as lower class (they expressed that they had not heard the term before). This lesson gave them insight into how they could be viewed by others and how they may make changes in how they present themselves in formal situations.
We reviewed our learning through an articulation game. Each person got thirty seconds to sum their learning up to a partner. The partner tallied their features of non-fluency and the winner was the person that used the least and was therefore the most articulate. This is a game that we will repeat many times to review learning for many different topics, allowing pupils to practice their fluency over time, not just while learning about this play.

Education is more than directing pupils towards exams. Pupils should be ready to enter the world as confident individuals. Oracy is purposeful no matter what they hope to achieve. The class in this reflection left the room with a new understanding of themselves. The learning in this lesson could be used over lunchtime conversations, in the next lesson that they entered, at home with their parents and beyond school into real life. If, like school 21, oracy was at the heart of all of their lessons, their confidence could soar as they practiced, practiced and practiced this life skill. Oracy does not take over subject content. You can talk about maths, question history and present thoughts in computing. Rather than taking away from subject learning, it enhances their ability to take part.

From Favourite to Fill In

All Eyes on You – Daily Observations